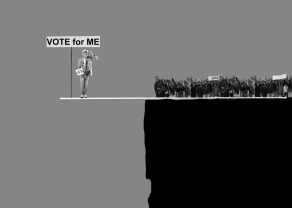 You can’t turn on the TV anymore without hearing about the November election. It’s March, ugh. This is going to make for a long spring and summer. And what’s worse is that the majority of citizens are already experiencing voter fatigue. Yes it’s happened before.

But this amount of disconnect is a whole new level.

What the hell happened to us?

Have we made the idea of being the President of The United States so abhorrent that real candidates no longer want to enter the race? Sunday morning round-tables spew venom at both sides. They shout over each other, desperately trying to sound like an important expert. They dissect every sound-bite that’s been aired over the last week, and try to read into them their own messages.

How about say what you mean and mean what you say?

Why don’t we stop taking sound-bites as religion? What would happen if we actually took the time again to evaluate candidates? And just because you don’t agree with everything a candidate says, could you maybe look at both sides of that topic and determine how important that particular item is for you?

You’re never going to find a candidate who agrees with you on every issue. If that’s what you’re looking for, you better jump in the race because that’s the only way to ensure such uniformity. Instead you need to decide what is really important to you and find a candidate who most closely shares your beliefs.

Stop listening to the media. They are all biased.

Yes, I said it, you read that correctly. If you’re looking for unbiased information on what a candidate’s platform is and how they have voted/will vote, you need to do your own research. Don’t take as gospel anything you hear on TV or radio. They have advertisers and bills to pay.

I’ll leave you with these thoughts:

Good luck, and vote safe out there.